When we talk about justice, we mean dealing with conflicts between people or groups of people. Often the use of violence is at the center of this. We understand violence as a spectrum. It includes physical, sexual, psychological an verbal abuse. Violence can take place on the street between strangers or behind closed doors in the closest of relationships. Relationships and networks can provide support while also being places where violence is perpetrated. Often, however, violence is not individual, but is related to and serves to perpetuate prejudice, unspoken norms, or discriminatory laws. These relations of domination generate violence that is not only expressed physically. This is what we call structural and institutionalized violence.[1]LesMigraS, Unser Gewaltverständis, LesMigraS Antidiskriminierungs- und Antigewaltbereich der Lesbenberatung Berlin e.V., 2015 (definition)

In today’s justice system, not everyone is equal, even though the system often claims they are. Those who have more money can afford better lawyers and are therefore more likely to be acquitted or do not have to go to jail just because the fine cannot be paid (so-called substitute imprisonment). When people are punished for being poor, it is classism. For many Black people and People of Color it is part of everyday life to be checked and humiliated by the police „without suspicion“ (racial profiling).[2]Rassistische Polizeigewalt in Europa, Arte, 2020 (video)[3]Die Berliner Kampagne: Ban! Racial Profiling – Gefährliche Orte abschaffen!, Stellungnahme, KOP – Kampagne für Opfer rassistischer Polizeigewalt, 2017 (article) Femicides are down played as individual cases instead of seeing them as a structural problem in society, and marital rape is often not named as such.[4]Netzwerk gegen feminizide – wir wollen uns lebend (website)[5]Kiezkommune, Feminizid, was ist das nochmal?!, kiezkommune.noblogs, 2021 (article) And the institutions behind all this – ministries, courts, police, secret service, etc. – are unassailable.

Separation of powers and laws

In many contemporary societies there is a separation of powers. This makes sense in order not to concentrate the power to decide on the solution of conflicts (judiciary), to exercise physical force (executive) and to make laws (legislature) in the same circle of persons. In capitalist society, however, there is still a clear monopoly of power in each sphere, and even the separation does not always remain clear (e.g., when the police, intelligence agencies and public prosecutors work together or politicians mingle in).[12]Anna Luczak, Kontrolle von Polizeihandeln: Schwierige Wege führen selten zum Ziel, Cilip, 2019 (written down presentation)

Within society, major conflicts are rarely resolved among those involved. Individuals are relied upon to judge people’s fates over many years (judiciary). When people defend themselves against violence, it quickly happens that they are condemned for it. This is because the monopoly on physical violence lies with the police and military (executive)[13]Prozessbericht vom 18.2.2021 / Justizwatch & Culture of Deportation, VG Stuttgart legitimiert rassistische Polizeigewalt in Ellwangen und gibt Freibrief für Razzien in Erstaufnahmezentren ab 6 … Continue reading and laws are passed in parliament, with little participation from society (legislative).

Laws are not the same as moral principles. The latter have a more informal character and are negotiated and enforced by people among themselves. Moral principles are not the same everywhere and at all times. They differ from community to community. If they are consciously developed as an alternative and on the principles of solidarity and emancipation, they can lead to more justice.[14]¿Zapalotta?, ¿Wer sind die Zapatistas?, 2021 (article) However, they are often permeated by relations of domination and remain unquestioned. Therefore, they have much influence on our moral compass and make it difficult for us to develop alternative conceptions of justice. There is overlap between moral principles and laws, which is why it sometimes seems right for us to obey them (e.g., do not kill).*[15]An important aspect here is the influence of religions, especially the dominance of Christian values, which was violently enforced through colonialism and missionary work. This is also very effective … Continue reading At the same time, there are laws that run counter to values of solidarity (e.g., the criminalization of migration and flight). These kinds of laws are difficult for us to understand because they are not made in our interest, but in the interest of states and profit.

So in today’s society, in general it’s not that we abide by laws because we find them meaningful. Or that when we commit violence, we can address and overthink where that behavior comes from and what we can do about it. The main motivation to abide by laws that are not in line with our values is fear of the consequences. This external motivation, driven by fear, is visible in today’s society and stands in the way of social solidarity.

In Europe the idea of state-regulated „public order“ developed along with capitalism. Through debt and expropriation peasants and craftsmen were forced to move to the cities. There, however, they did not voluntarily enter into dependent wage labor. Begging, sex work, theft, robbery and moving from place to place served to sustain life. At the same time, people eluded state control through these means. To reduce the risk of revolt and force people into wage labor and thus into the capitalist order, these independent survival strategies were criminalized and punished. It was the evolving police force that ensured that people were captured to perform forced labor in workhouses and on ships.[16]Silvia Federici, Caliban und die Hexe. Frauen, der Körper und die ursprüngliche Akkumulation, 2020, 7. Auflage, Mandelbaum Kritik & Utopie (book)

At the same time, state structures and institutions emerged. Together with a change in religious and philosophical values, they were the basis for a deep-seated self-disciplining. Over the course of centuries, this brought about a social transformation in which people largely internalized capitalist norms and behaviors and accepted them as „human nature.“ The mass exercise of violence by a ruling class was not abandoned in the process. In addition, pseudoscientific theories ensured that poor people and marginalized groups were seen as inherently „criminal“ and thus could be targeted for surveillance and persecution, even without cause. In the 19th century, therefore, the police mainly controlled neighborhoods inhabited by poor people and focused on the bloody suppression of strikes.[17]Lea Pilone, Frieden für die Obrigkeit, Analyse & Kritik, 2021 (article) Methods of control and surveillance were further developed*[18]Germany committed genocide against the Herrero and Nama in its colony, now Namibia. In the course of this, the first German concentration camps were established Jephta Nguherimo, Völkermord an … Continue reading in German colonies, while under National Socialism the police racially persecuted, among others, Jews, Roma, and Sinti*[19]This racist and anti-Semitic persecution not only continues today, but has a long institutional and structural history in Europe. (See ‚Antiracism & decolonization‘).[20]Nelli Tügel & Jan Ole Arps, »Wir müssen uns aus dem polizeilichen Blick herausarbeiten«, Analyse & Kritik, 2020 (article)

Therefore the task of the police and the justice system is not to protect all people, but to protect the respective current relations of domination and property. Police violence and racism are not isolated cases or individual misconduct, but the structural basis of the police and the justice system.“*[22]This podcast is also about, among other things, the emergence of the police in the U.S. in the context of perpetuating enslavement: Radio Dreyeckland, Sicherheit für wen?! Institutionalisierte … Continue reading

It is often said that people are intrinsically evil and therefore harsh laws are needed to control them. However, we think that human thought and action are shaped by the particular experiences and material circumstances of life. In a society in which everyone has access to good living conditions and violent oppressive relationships and relations are increasingly dismantled, completely different possibilities for personality development open up. This is not to say that people are inherently good. This is something we can only find out through serious examination of ourselves and with a lot of patience. We assume that people can and learn and change themselves even at older age. In this regard, it gives us hope to see how people behave cooperatively and support each other even today, despite an order based on competition and punishment.“[23]Hillary Lazar, Love, Care, and Mutual Aid as Community Self-Defense, Life, Freedom & Ethics: Kropotkin Now! (Day 2, Saturday Sessions 1A & 2A), ab 3h 57m, 2021 (video)[24]Lee Dugatkin, Kropotkin’s Law of Mutual Aid: An Evolutionary Perspective, Freedom & Ethics: Kropotkin Now! (Day 1, Friday Sessions 1 & 2), ab 2h 58m, 2021 (video).

What do we want to do differently?

We are convinced that in a classless society based on solidarity and mutual aid, there will be less violence. Many acts that are criminalized today will occupy less space. If the abolition of property means that everyone’s basic needs are met, there will also be fewer conflicts over property. However, violence will not stop from one day to the next and there will always be conflicts when people live together.[25]Georges Fontenis, Manifesto of Libertarian Communism, Kapitel: Defence of the Revolution, 1953 (manifesto) So we need concrete ideas on how to deal with this in the long term. To avoid falling back into old structures, these should be based on other fundamental values. (See ‘Introduction’)

Mutual responsibility and conscious agreement on common arrangements are at the heart of this. If we want to resolve conflicts, the focus should not be on the violation of abstract rules, but on the concrete actions of individuals and the origin of these actions. At the same time, we must become more aware that people affected by violence do have the power to act.

Conflict resolution should no longer be preserved for a few professional people, but should be carried out collectively. To make this possible, conflict resolution must become an essential part of our education.[26]Konsens lernen (website with many resources)

Even then, there will be conflicts that cannot simply be resolved among themselves. Therefore, we have considered an initial approach to concepts and structures for conflict resolution in a liberated society and dealing with interpersonal violence, and we have compiled existing concepts.

These proposed structures are deliberately independent of state institutions. They are based on the fact that all people living in a community participate in them voluntarily and agree to the common principles in an informed way.

In a longer process that may follow boundary crossing, it is advisable to apply other concepts that include the person committing violence and their perspective. These concepts can be Collective Accountability, Transformative Justice, and Intersectionality*[30]These alternatives, already lived in practice, have been developed within communities that are simultaneously confronted with various forms of state, societal and interpersonal violence: e.g. Black … Continue reading}}:

1 Where do we want to go in the long term?

1.2 Preventing Permanent Concentration of Power[40]CrimethInc., Fire Extinguishers and Fire Starters – Anarchist Interventions in the #SpanishRevolution, an account from Barcelona, Abschnitt: Grave Errors of the Protagonists of the Central … Continue reading

Example: Person X and person Y, who share an apartment, have an argument, during which X starts to hit Y. Here, the awareness team in the housing block would make sure that Y gets out of the situation, for example, by asking X to leave the apartment or escorting Y to the space of the justice structure. In the event that X continues to be violent, even after being asked to leave, the local intervention team can intervene. To resolve the root of the conflict (Why were they fighting? Where did X’s violent behavior come from? What does Y need to feel safe in the apartment again?) is the responsibility of the neighborhood justice commission in the coming days/weeks/months.

3 What can we do in the short term?

(in addition to those in footnotes and sources) 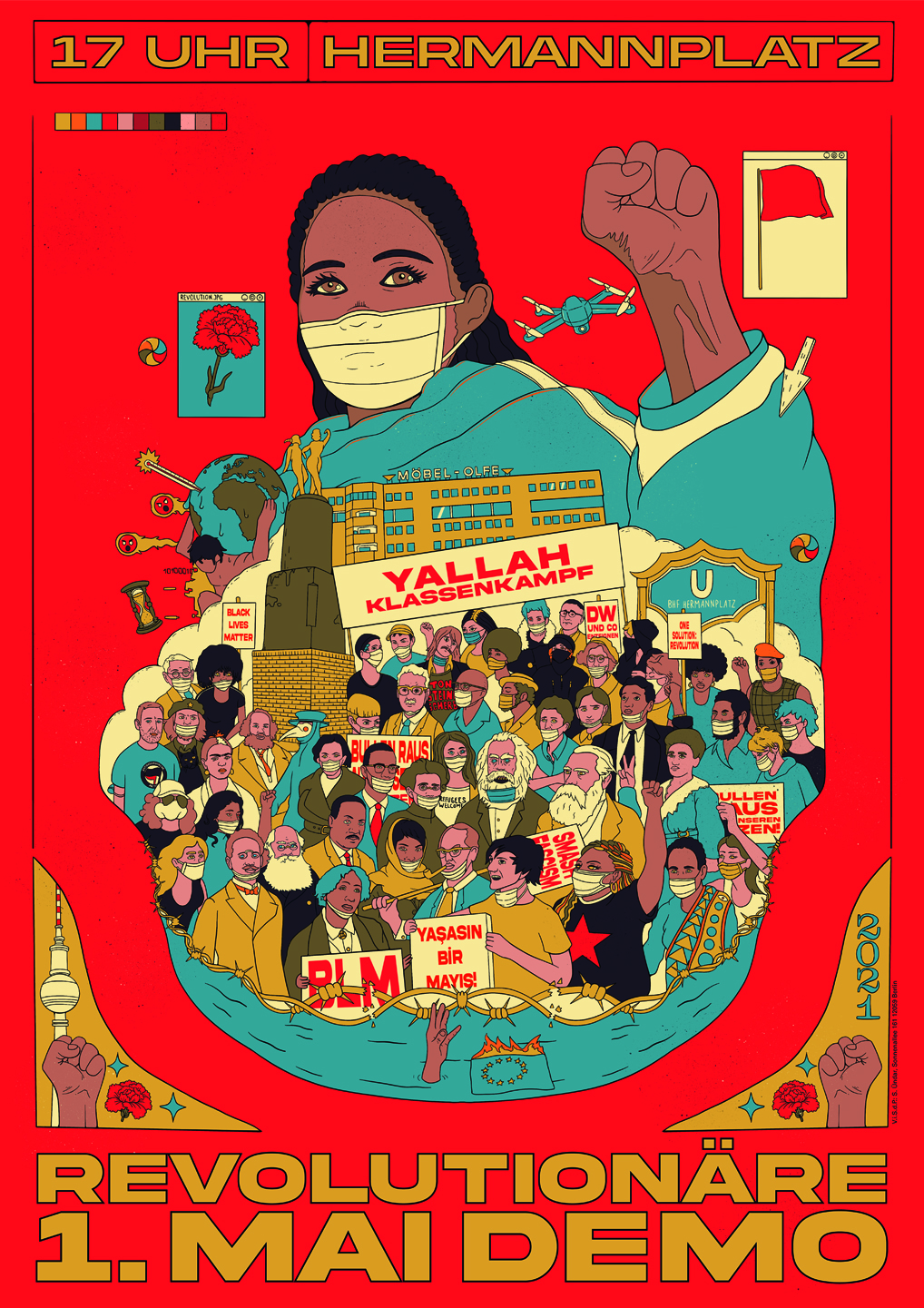